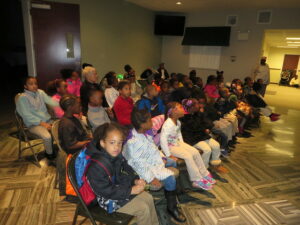 Keisha started coming to Aslan at an early age, and she came from a difficult home situation where her father caused a great deal of problems for the family. She was basically a well-behaved child, but we always knew there was the potential for her to make choices that would lead her down the wrong path.

Keisha regularly attend our Right Choices classes, Tutoring and summer camp. Aslan staffer, Queenie Ferguson, kept a close eye on this young girl and spent long hours counseling her and warning her to stay away from bad influences in her life. We could tell Keisha was listening, but we were not always sure she understood the importance of making the positive values we were trying to impart to her a part of her life.

Although she wasn’t a top student during her high school years, she did well and graduated. What was wonderful is Keisha continued to come to Aslan even after she graduated. The biggest change in her life happened when she started attending church with Queenie and several other girls her age. She fell in love with a young man and told us she wanted God to be the center of her family’s lives. She’s now happily married and working serving as a CNA (Certified Nurse’s Assistant) in a retirement home for elderly men.

But that’s not the end of the story. Keisha’s life was so deeply touched through the ministry of Aslan that she wants all of her children to also come to our programs. We’re thankful that along with Keisha’s children, about 20% of the children who attend our programs are children of Aslan graduates!