As a result of Aslan’s exceptional work with youth, on September 19, 1991, former President George H. W. Bush named Aslan one of his 1,000 Presidential Points of Light. Aslan was chosen for this honor from among over 15,000 worthy nominations submitted to the White House during the Bush administration. In order to be chosen as a Point of Light, an organization had to demonstrate that they provided services that made a significant contribution to the betterment of society and had a lasting and permanent effect on people’s lives. 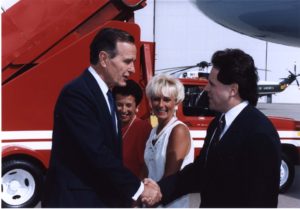 In correspondence with Aslan, President Bush wrote, “I was delighted to learn of your outstanding work on behalf of your community. Your generosity and willingness to serve others merit the highest praise, and I am pleased to recognize you as the 566th ‘Daily Point of Light.'”

In October of 1991, Lynn Ann and Craig Bogard from Aslan were invited to join George and Barbara Bush at Epcot Center in Disney World for a special celebration honoring all the individuals and organizations that had been named Points of Light. In the summer of 1992, Aslan’s Executive Director, Craig Bogard was invited to JFK International Airport to meet personally with President Bush (see photo above).

On February 10, 1992, Aslan hosted a 17th Anniversary Celebration to share the “Point of Light” award with our many volunteers and supporters. On that special evening, Aslan was honored again by the New Jersey State General Assembly with a resolution commending Aslan’s ongoing work.

In 1992, Aslan was also chosen to be the recipient of a $6,500 grant from the Billy Graham Evangelistic Association.

In 1993, Aslan received World Vision’s prestigious “Partner Ministry” Mustard Seed Award accompanied by a $5,000 grant. World Vision President, Bob Seiple, said, “By highlighting their [Aslan’s] work, we want to inspire others to do the same”.

From 1999 to 2004, Aslan was selected as a major recipient of Governor Christine Todd Whitman’s New Jersey Faith-Based Initiative. This 6-year grant enabled Aslan to establish an outreach in the severely depressed public housing projects of Asbury Park, New Jersey.