Another Mountain to Climb

Another Mountain to Climb

Every time I come to visit Haiti I am reminded of how wonderful the Haitian people truly are. At the same time I am also reminded that every joy in Haiti is tinged with sadness. There could not be a better example of this than Emerceline Joseph, the niece of our Haitian director, Joseph Israel.

Eight years ago Joseph’s brother died at the age of 37. His wife was left with no way to provide for her four beautiful daughters. A couple of weeks after her husband’s death, she brought her children to Joseph’s parents and left for several weeks. She never returned, so here were four more mouths to feed in an already large family.

Fortunately, Aslan and our partner in ministry, Step Of Faith, were able to step in and begin supporting the girls in school. We also gave Joseph extra food from time-to-time to help the girls’ needs. Now so many years later they have grown up before our eyes – four beautiful and talented young ladies. Back in September we sent three of the sisters to university in Port-au-Prince. One is studying to be a dentist. One wants to be a laboratory technician. And, Emerceline wants to be a diplomat!

After only a few months in school, however, Emerceline was viciously attacked in Port-au-Prince on her way to school, when she wouldn’t give a thief the 30 gourde (equivalent of 50 cents) she had in her hand for a tap-tap. The thief beat her so badly that one eye was completely swollen shut when she returned to Ouanaminthe. She also had to have X-rays because her chest was badly swollen where she’d been hit. She was very fortunate to be alive! As long as it took for the wounds on the outside to heal, however, the trauma on the inside is taking much longer to heal. She is continually plagued with fears about the attack, and she is very afraid of returning to Port-au-Prince. Joseph is currently searching for another school in a safer area. 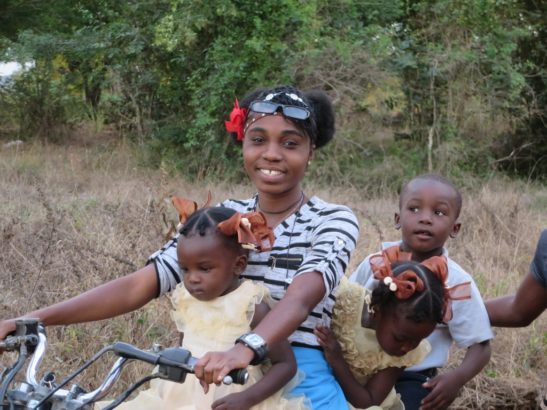 Emerceline, with three younger cousins who also lost their father just after Christmas

The Haitian people are amazingly resilient. They dislike suffering as much as any one of us does, but they view it as a very real and present part of life.  One of the most well-known Haitian sayings is – after a mountain, another mountain.  Haitian people know that every morning they will awake with a mountain in their face. They can lie down and die . . . or they can climb the mountain. It doesn’t even matter if they make it to the top, because the next morning there will always be another mountain staring them in the face.