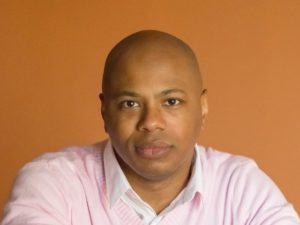 Orphaned Youth Earns a PhD As An Adult

Lynn A. and his brother were orphaned at the ages of 12 and 11 and came to live with their compassionate & loving grandparents. Lynn began attending Aslan in middle school, and he was a part of every activity we provided. He truly enjoyed coming to Aslan programs and felt all the care and concern staff provided.  Soon he began to come out of his protective shell.

After several years in our long-distance biking program, Lynn developed into a student leader. He was chosen as one of the students to go with Aslan on our first trip to Haiti. As with all the students we take there, this revolutionized Lynn’s life. He attended and excelled at Red Bank’s Performing Arts School, and he was paired with a mentor that encouraged this success. He returned with Aslan to Haiti on two successive years before graduating.

Lynn was accepted on full scholarship to Westminster Choir College in Princeton. He taught middle school for several years, while he worked on his doctoral degree.

Lynn now lives in Virginia, where he teaches school and directs choirs!