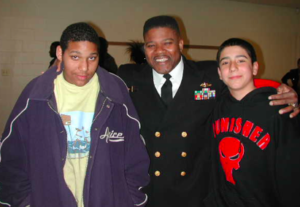 Chris B. was one of the first young people who joined our program when Aslan was established in New Jersey in 1975. From the start, there was something special about this young man. Chris had a seriousness and focus that was unusual for a 14-year-old, and it immediately caught our eye. He was raised in a single-parent home, with two younger brothers who were continually in and out of the hospital struggling with sickle cell anemia. In his tiny house, Chris turned a small storage room into his bedroom. The back door wasn’t sealed too well, so winters in his tiny bedroom were pretty cold.

Chris faithfully attended Aslan’s Right Choices program where he developed a strong moral compass that would help guide him throughout his life. In high school he excelled in track in field, and he became the captain of his wrestling team.

It was Chris’ goal to attend the Naval Academy in Annapolis, and he received the appointment to do just that. The Navy, however, required Chris to attend a year of prep school in Rhode Island to bolster his grades in mathematics and science. He graduated from Naval Prep School 7th out of 200 students!

Above all other influences in his life, Chris credits Aslan Youth Ministries as the main influence in his life that has resulted in his success!

During his years at the Academy, Chris excelled in football and set rushing yards for the lightweight Navy team that will probably never be broken. He turned down the opportunity to play on the regular Navy team, so that he could concentrate on his goal to become a Lieutenant Commander on a Navy attack submarine. Upon Chris’ graduation he received that commission, and he went on to become a full Commander.

Before the first Gulf War Chris was attached to an Admiral in Milan, Italy where he was in charge of stationing all the submarines for NATO in the Mediterranean. He was then sent to the Navy post-graduate school in Monterey, CA, where he graduated with a double major in Oceanography an Meteorology and an almost 4.0 average! Just after 9/11, Chris was transferred to Allied Command in London where he spent the rest of his career fighting in counter terrorism.

Chris and his wife and child then moved to Perth, Australia where they have lived for the past 10 years. Chris worked in security for one of the largest shipping companies in Australia. For many years Chris worked as a Principal Consultant for Intertek, a multinational corporation that tests, inspects and certifies products in over 100 countries. He is currently employed by a security software company developing new antiterrorism technologies.