The Specter of Death ~ Always Near in Haiti

The Specter of Death ~ Always Near in Haiti

It is sad to hear from Joseph, director of Aslan’s Haiti programs, when one of our friends there has died. Often Joseph’s calls involve someone young, but yesterday he called to tell me that our old friend, Loriston, had passed away.

When we first purchased our property in L’Acajou in 2003, Loriston and his family lived in a “squatter’s shack” that sat on the front portion of our land. By Haitian law, we were required to ask him to move, but we were still able to provide him with a small tree to use as the center post for the small hut he built next door to us.

We became fast friends with the family, and Loriston paid many visits to us and the groups of people we brought with us to Haiti. He was always hungry, so we tried to give something to his family when we were able. In 2013 a devastating stroke paralyzed Loriston’s left side. We visited his dirt floor hut to pray for him, and three months later he was up walking again! (See photo above of Pastor Terrence Porter praying for Loriston in 2013).  His life changed dramatically, and he became the first one to church every Sunday from that point forward. It was a beautiful thing to see him holding his cane in the air, dancing, with a huge smile on his face. 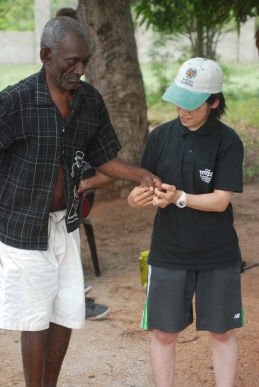 A wonderful Japanese student from Christ For the Nations providing physical therapy for Loriston in 2015.

I’m sure you’ve all heard people philosophize about whether or not there’s a crashing sound when a tree falls in a forest thousands of miles away. The answer, of course, is “Yes!” The sound is there whether you’re there to hear it or not. We live in a world that devalues human life more and more each day. In some people’s eyes, Loriston (much like a tree in a forest) was an obscure, unimportant peasant who lived an unremarkable life in a forgotten land. But to God, Loriston was as important as anyone on earth.

P.S. Loriston’s family cannot afford the $750 it will cost to bury him. If God moves on your heart, we could use your help in meeting this need.