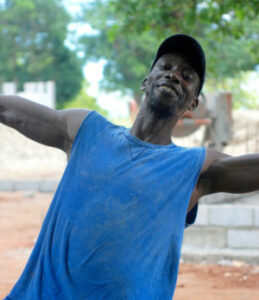 Joseph Israel (Aslan’s Haiti Director) lost his younger brother, Edel, this morning. Edel was only forty years old, and over the years I had become very close to him. As a master mason, he made every block for the fence around our property and for every concrete building we have. A tall, muscular man, he always had a huge smile on his face and greeted me with a strong handshake and often a “bear hug.”

Edel had experienced some health problems during the last year that worried Joseph. However, identifying the root cause of any illness in Haiti is far from an exact science in Haiti. Good healthcare is nonexistent there. Very early Tuesday morning Edel’s sister was concerned when she awoke to find him up and around. But she went back to bed when he told her, “I just got up to talk to my friend, Jesus.” When Joseph’s father tried to wake Edel up at 10 to eat something, he found he had died.

Unless you’ve been in a place like Haiti that is so different from our world in the United States, it’s hard to fathom how commonplace death is throughout a society. A Haitian child has a 1 in 5 chance of dying by the age of five. The average life expectancy for Haitian adults is 66 for a woman and 61 for a man. Haitian families spend more on funerals in their lifetimes than on any other one thing. Many families are in debt throughout their live from borrowing money to lay their loved ones to rest – which is insult added to injury.

Edel’s funeral will be held on Saturday at a large church in Ouanaminthe. He was well loved, and there will be many there to pay their respects. Lynn Ann and I understand the life-long suffering of losing two sons, so please especially pray for Edel’s parents.